Weather
Interactive map
Follow us !
Your opinion interests us 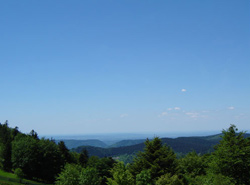 The Franche Comté peaks nature reserve covers 2259 hectares and three departments (Vosges, Territoire de Belfort and Haute-Saône). The rounded mountain summits in this area are known as ‘ballons’ in French.

The aim is to protect any territory with a natural habitat of special interest for conservation. There are three main aims, Protect, Manage and Introduce people to nature, more precisely :

The Franche Comté peaks nature reserve includes "25 different habitats among which 18 of major importance". 95 % of the reserve is covered in forest; it is also characterized by the presence of high prairies (moors, high mountain pastures), of peat bogs, scree and cliffs. These specific habitats are home to a wealth of fauna, including "70 protected vertebrate animal species, among which 10% are of European interest ". Among them the Capercaillie, the Tengmalm Owl, the Peregrine falcon … In addition there are numerous mountain plant species (ferns, orchids, etc.).

The regulations for the Franche Comté peaks nature reserve were fixed by the ministerial decree n°2002-692 of July 4th, 2002 which created the reserve and the order of the prefect D2 D2/R/2005 R n°15 of May 17th, 2005, which defines a Plan for the Organization of Park Frequentation. The sensitive period from December 15th to July 14th is always taken into account. Hiking is possible on the marked trails all year round; it is even possible to walk off these trails between 15/07 and 15/12, except for some more fragile zones (Bravouse and Rossely peat bogs). Pony trekking and mountain biking are authorized on the marked trails all year round. Skiing and hiking on snowshoes are authorized on marked trails during the winter period.

Dogs are forbidden in the reserve as is flower-picking, mineral collection, photography using a hide, off-road motor vehicles, camping, fires, garbage dumping, noise pollution and the destruction of animal and plant species. Hunting, fishing and organized sports events have specific regulations.
The Franche Comté peaks nature reserve was created by Ministerial Decree on July 4th, 2002. The administrators are the National Forestry Office for North Franche-Comté and the Franche Comté peaks regional park. A consultative committee, including local representatives (councillors, land owners, scientists, hunters, representatives of local authorities, nature conservation associations, sports or leisure associations, administrations and public institutions) and chaired by the Prefect, meets at least once a year and " expresses its opinion on the function of the reserve, on its management and on the conditions of application of the measures planned to the present decree " (Decree n°2002-962).